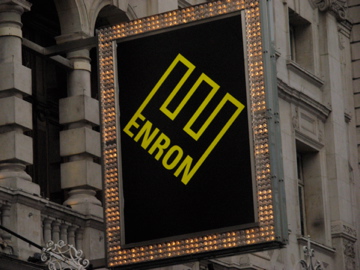 Going to see Enron in London’s West End last week was to witness an acerbic indictment of corporate excess and self-delusion. As the play pointed out, we all bear some responsibility for the way the corporate world has frequently lost sight of its reason for being.

However, there was a time when Enron looked like a company going places and innovating. It commissioned Paul Rand, one of the most respected corporate designers of his generation, to design the logo and identity for the company.

Today that logo comes readymade as the identity for the play itself, liberally used on all promotional material and signing. I wondered who now owns the rights to that piece of intellectual property. No doubt Rand cheerfully assigned the rights to the company once he was paid for his work. Today the company no longer exists. The brand is ‘worthless’. But for play’s promoters it’s a useful piece of identity nevertheless.