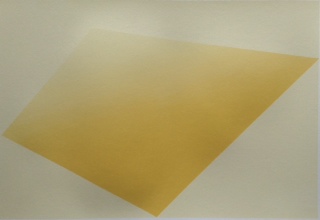 Friday night the weather changed. At Rye Harbour we experienced the unusual warmth of the late sun on our backs, walking to the sea. On the horizon, visible through binoculars, were ships floating on air, surmounted by an upside-down mirror image of themselves, forming a shimmering liquid spectacle. Across the whole arc of Rye Bay from Dungeness to Fairlight a band of sea – or was it sky? – stretched in the distance, fooling the eye’s effort to determine the elements from one another. A wall of water, a band of mist, a discontinuous horizon line.

Half an hour later and half the the sky had turned bruise purple, pushing a large, dark cumulus before it. Within minutes the wind had picked up, tearing branches from trees and into our path as we drove home. Ahead a low band of orange light illuminated our way as the sky above and behind blackened and spots of thick rain appeared on the windscreen.

The mirage at sea, I learnt, was a fata Morgana – a phenomenon created when bands of cool and warm air meet and the refraction of light causes an illusion to deceive the eye. Every now and again the world around us causes us to stop, and puzzle, and see things anew.

This screen print I made earlier this month I called Mirage – a shape dissolves into nothingness and the eye is caught looking for explanation.

Another print, I called Firestorm, twists its colours inside out. Both prints started out as riffs on Malevich’s Yellow Plane in Dissolution. ‘The cosmos is dissolution’ Malevich was quoted as saying. My first witnessing of a mirage seems to confirm his observation.