Bass Notes: The story behind the show 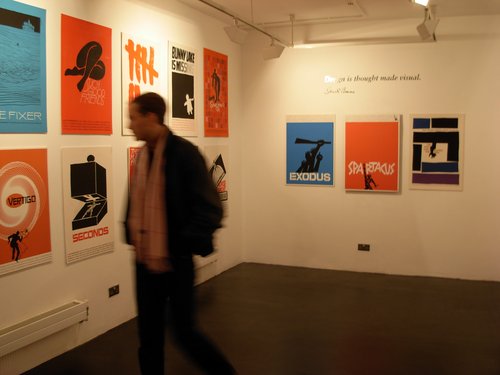 Now open at Kemistry Gallery, the show is doing well: the private view launched to a packed house and it has excited lots of interest from different quarters, with the Guardian giving it a boost this Saturday.

There’s a backstory to the origin of the posters. This piece I wrote for the exhibition tells the tale:

A year or so after Saul’s death in 1996, I got a call from a headhunter in the States saying that she had a brief to find someone to take over the Saul Bass studio in Los Angeles. Herb Yager, Saul’s partner, no longer wanted to run it himself, but was keen for the business to continue. Since we had been looking to set up an office in the US, this seemed like a real opportunity. After Herb was reassured that he had found suitable inheritors, the business was acquired. We celebrated the event at a dinner at the Beverly Hills Hotel with Herb, Elaine Bass (Saul’s widow) and some of the team.

A few months later we found we had inherited something else. A travelling exhibition of Saul’s film posters had been doing the rounds of film festivals all over the world. One day it arrived back in London. We had to store it and look after it. We soon realised it was too big and expensive a task to keep it properly, so we handed it on to the British Film Institute, requesting that it should not be lost from public view, and hopefully shown from time to time.

The posters on show, thanks to the BFI, are the very same ones that formed part of the travelling exhibit. They were produced by the Saul Bass studio in the 1990s to celebrate Saul’s work. Many air miles later these historic originals are now on show here.